PBN defines navigation performance requirements for aircraft flying on an ATS route, terminal procedure, or approach procedure. These routes and procedures are composed of waypoints which are expressed by WGS 84 coordinates rather than fixes expressed by radial/bearing and distance from ground navigation aids and permit the flexibility of point-to-point operations.

Since 2009, New Zealand has been in the process of implementing Performance Based Navigation (PBN) across the aviation system.

Since the 1920s, aircraft have navigated at night and in bad weather (known as Instrument Flight Rules) by flying in a series of straight lines between radio beacons located on the ground. As these beacons have limited range, a flight between two points will often need to plot an indirect and inefficient zig-zag course using several different ground-based navigation aids (GBNA).

This type of navigation requires commercial aircraft to use large airspace separation buffers, because of both the inaccuracies of ground-based navigation methods and the need to protect against operational errors.

PBN moves aircraft navigation away from this methodology to a system primarily reliant on satellite-based technologies, utilising Global Navigation Satellite Systems (GNSS) such as the USA’s Global Positioning System (GPS). This enables aircraft to fly routes directly between virtual waypoints at set geographical coordinates, rather than between physical beacons. As the number of possible virtual waypoints is effectively infinite, routes using them can be much more direct than those using GBNA.

RNAV is simple straight-line waypoint-to-waypoint navigation, whereas RNP is more advanced and can enable curved routing. 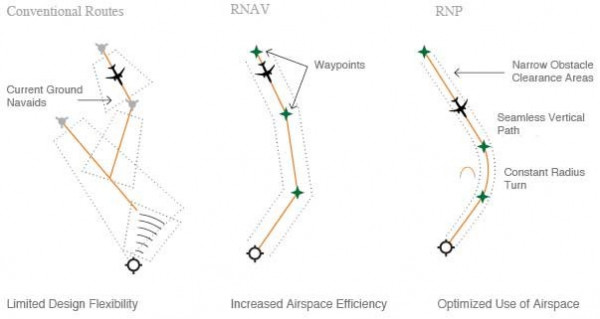 PBN delivers a range of benefits in New Zealand.