Aircraft broke up in-flight as a result of ‘rudder flutter,’ says CAA

The Civil Aviation Authority (CAA) is warning pilots to ensure they fly within an aircraft’s limitations, to avoid the type of “structural failure and in-flight breakup,” that occurred during the fatal flight of a Van’s RV-7 light aircraft in 2018.

The CAA Safety Investigation Report released today stated that the amateur built, single engine aircraft, registered ZK-DVS, was on a private flight from Whangarei towards Dargaville with two people – the pilot and passenger – who both died in the accident.

Aviation Safety Deputy Chief Executive Dean Winter said the key learning from this tragic accident is to: “understand the performance and handling characteristics of your aircraft and the risks associated with operating close to the aircraft limitations.

“Accidents can occur whenever the aircraft limitations and/or the pilot’s own capabilities are exceeded and that’s why it’s important to fly within those limits,” he said.  “These risks can be minimised by preparation, awareness and training.”

The 53-year-old pilot held an aeroplane private pilot licence and a helicopter airline transport pilot licence.  He had flown about 380 hours on fixed wing aircraft and had gained most of his flying experience on helicopters where he had more than 4300 hours.

“Five seconds later the AoB increased to 130 degrees and the aircraft began to pitch nose-down. During the resulting descent, the indicated airspeed was recorded at 244 knots, which exceeded the aircraft ‘never exceed speed’.

”About 30 seconds after entering the high AoB manoeuvre, witnesses observed the aircraft break up in flight and then hit the ground about three nautical miles south-west of Te Kopuru.”

The report states that in-flight breakup occurred as a result of “rudder flutter”, as the aircraft airspeed exceeded the design limitations.  The rudder flutter resulted in the separation of both the rudder and the vertical stabiliser.

The investigation analysed the human, equipment and environmental factors that may have caused, or contributed, towards the accident. 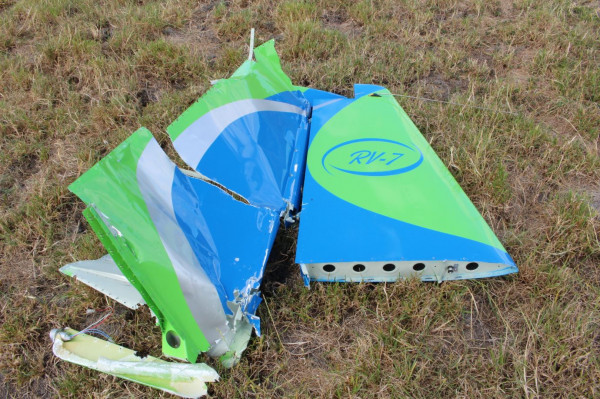